A series of articles dedicated to Silvena Sport’s young horses, heirs of legendary stallions of Europe.

After the middle, and at the end of the 20th century there were born horses, which now can be seen in third, fourth and fifth belt of current European and world champions’ pedigrees. In this article were are going to introduce you yet two more pillars of modern day horse breeding, namely Landgraf I and Pilatus.

Landgraf I line produces horses, which leave their distinguishing mark as their sire and grandsire – legendary Ladykiller.

That line of horses is known for their good combination of technique and jump energy. The most famous ones, among the others are Lordanos, sired by Lord and Landor S, sired by Landadel, while the most intriguing offspring of that line, we are lucky to have our mares in Bulgaria bred by, is Lord Argentinus. He is owned by Mr Hristo Kirov, and semen could be bought at around EUR 700. 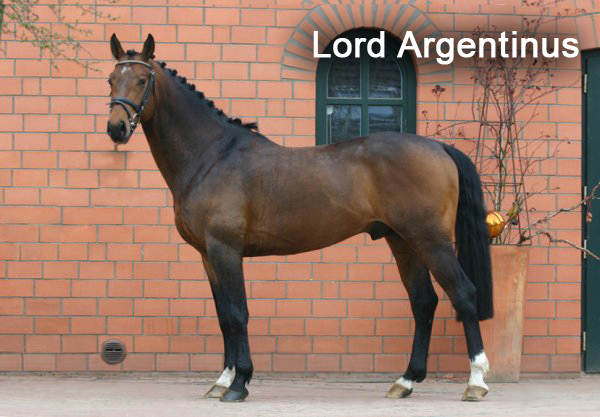 Even not that tall, he has a phenomenal jumping cleanness and excellent mechanics. There also is another much wanted representative of that line in Europe -  Numero Uno sired by Libero H, but the difference in price for breeding is in favour of Lord Argentinus in the ratio  of 1:2,5. Please, find below two videos showing his qualities: http://www.youtube.com/watch?v=AhkxCvOh-X8 и  http://www.youtube.com/watch?v=E5XOctcWWAk
One of the most successful sons of Perseus is Pilatus – the father of two of the most influential modern day stallions, Polydor and Pilot.  Pilatus sired for the sport 14 stallions and 13 mares, licensed for breeding of higher class, in total.

More famous of that line are the stallions Pikor, Pilot and Polydor. That line distinguishes mainly for their jump power, and is preferred by breeders, having just one minus – STRONG CHARACTER! Polydor is said as the most sensational father of show jumpers in the last 40 years". "A stallion with great personality and great dignity." Connoisseurеs know Taloubet Z and Christian Ahlmann as the tandem that until quite recently was on the top of the world rankings of European equestrian competitions. Silvena Sport has semen of Akhan Z, who is a compete equivalent of TALOUBET Z. Here is a video of TALOUBET Z that proves his qualities: http://www.youtube.com/watch?v=ElWjwtAX4iY, and the jump-off of World Cup Final in Leipzig: http://www.youtube.com/watch?v=XfLdQ9iLAJs

In 2012 two mares will be bred by him. TALOUBET Z and ZANDOR Z are two of five most valued  Zangersheide stallions, both are maternally of POLYDOR. In Bulgaria there is an offspring of theirs stabled at a horse breeding farm at Getsovo village, near Razgrad.