One of the most distinguished stallions we would like to make you aware of in this article of the NEW CHAMPIONS ARE COMING series is STAKKATO. He remains in the modern history of contemporary horse breeding with its sports longevity, numberless successful competitions he took part in, and hundreds of offspring. It is just another proof that height makes no difference, where a horse has a potential. With his 163 cm at the withers   STAKKATO cannot impress anyone, but his qualities and achievements deserve a bow and inspire respect from every horse breeder! STAKKATO was born in 1993 and remains the most dazzling offspring of the Hannoveraner breed originator  GOLDFISCH II.
GOLDFISCH II’s sire and damsire, the fundament of the Hannoveraner breed, were GOLDAMMER II and FLUGAMME. There were quite a few GOLDFISCH II offspring, but the most proven one was GOTTHARD – the sire of hundreds fantastic sons and daughters, while the other  - GRAF, was the sire of GRANDE, also a proven stallion, who had left a bright trace with his offspring.
The stallion who has had the greatest contribution in the last ten years in horse breeding, having the highest breeding index of the Hannoveraner breed is STAKKATO. In his pedigree, GOLDFISCH II blood can be seen three times, twice through his sire and once through his damsire! In 2007, due to his countless successes and incredible offspring, competing mainly in the higher level of modern day equestrian sports, he was crowned STALLION OF THE YEAR. In 2011 TOP 1% ranking, in 10 out of 1000 stud horses he was number one, and two more sons following, while in 2012 ranking there already were three of his male offspring.
Last year, STAKKATO won first place in that ranking, having the highest jump index and the highest inheritance coefficient. 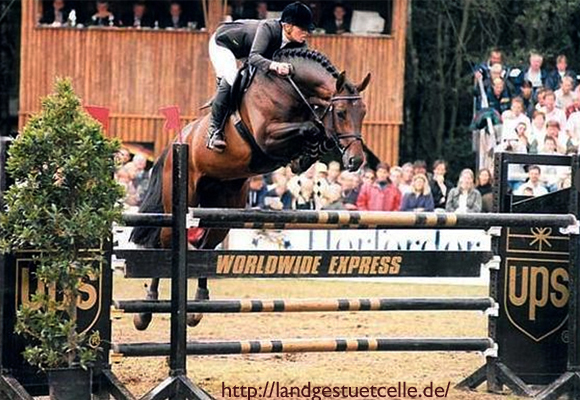 Recently, among his best sons, the most shining star is SPARTACUS, who, maternally is of the GRANNUS line.
Click the link below and enjoy his class and potential:
http://www.youtube.com/results?search_query=SPARTACUS+TN&sm=3

He, on his part, also carries, paternally and maternally, GOLDFISCH II’s genes!!! SPARTACUS was bought from Germany, but never competed for it. Under the saddle of MARKUS KUTCHER, he climbed up to the top level. Last year, with a brilliant style, and as if jokingly, he jumped fences of 150 and 160 cm! Following his incredible success with CORNET OBOLENSKI, MARKUS had also fascinated the world with SPARTACUS, however, after successes at GUCHI GRAND PRIX PARIS 2012, HONG KONG MASTERS 2013 and LONDON 2013, he stopped competing with him. Under the saddle of Alexsandra de Mistura, SPARTACUS jumped 115cm fences at GUCHI GRAND PRIX PARIS 2013, and most probably he would carry on competing under her saddle!
SPARTACUS was the CHOSEN ONE, among hundreds of splendid stallions, for Silvena Sport’s 2014 breeding activity. In February SPARTACUS’ semen was bought, and it was planned insemination of at least two broodmares! His first offspring are expected in 2015.
At the end of February a SPARTACUS’ son was bought by Mr Hachik Papazyan, who probably would take part in the national competitions this year!!!