The last two stallions I would like to make you aware of in this article of the series are FARN and FURIOSO II.

FARN is rather an old-fashion type of Holsteiner, who succeeded to leave behind him many offspring, both sons and daughters, definitely proven jumpers. Through his male offspring, and foremost through NIMMERDOR, horse breeding in the Netherlands has undergone a complete makeover. If one follows his pedigree at its end highlights ACHILL – ‘F’ line that began in 1877!

FARN’s great influence on  Dutch Warmblood breeding was acknowledged, as a few years after his demise he was awarded  ,,PREFERЕNT’’, the most prestigious award for contribution in horse breeding! Of all his offspring, the most popular remains HEARTBREAKER, who until recently was the stallion having the greatest number of offspring globally, while the most outstanding stallion remains NIMMERDOR, who lived up to 31 years of age. Besides, NIMMERDOR, through his son HAMLED, gave the equestrian sport the exceptional HICKSTEAD, and laid the fundament of one of the most worldwide known horse studs VDL Stud. During his lifetime, in 2000, NIMMERDOR was awarded Stallion of the Century!!!

By the memories of the people who used to work with him, he was so special that he even had his own preferences on the mares to breed; therefore his offspring are so exceptional!!! Apparently, he had felt something humans did not!!!

FURIOSO II is an excellent combination of the Thoroughbred FURIOSO I and a damsire of Selle Français breed. His offspring have great mechanics and various of qualities, which make them virtually universal horses! Following Cor de la Bryere and Alme Z , Furioso II was the third of that breed who had great impact on  making of modern day top jumpers. His offspring are thousands; however there were two most famous and influential - For Pleasure and Voltaire. At first glimpse it cannot be said that For Pleasure was an impressive stallion, on the contrary, middle height, chestnut ..., but everyone seen the way he had jumped fell in love with him forever!!! Currently, single insemination price, plus a fee for foal sired by For Pleasure is up to EUR 5000!

The other, having worldwide fame, son of Furioso II – Voltaire was a massive stallion, with a huge attractiveness and charm! We already mentioned him in NEW CHAMPIONS ARE COMING 2 article.

In conclusion, to all friend of equestrian sports in Bulgaria, we would like to finish this article with the fact that an offspring of those two stallions is VALENTINO, who not just by chance in a few years’ time climbed up to Top 1% of 1000 most recommended stallions at  the Hannoveraner Verband. He has established the foundations of Silvena Sport’s  New Generation of Sport Horses. His first foal was born by VENERA MILOSKA - she a good cross of an Anglo-Arabian mother with a Hanoverian! 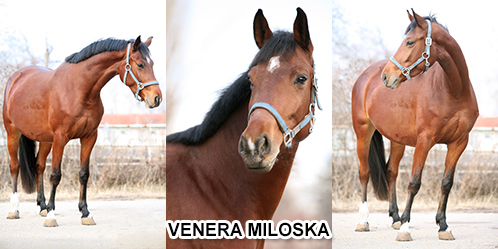