In this article of the series, dedicated on foundations of modern day top jumpers, I would like to introduce you two more stallions having great contribution to the high level equestrian sports. They are DARCO and LE TOD DE SEMILY.

The first one was crowned as the best sire in the world, having left thousands of sons and daughters. He had proved himself as a super stallion of the highest class. Neither his achievements nor his offspring could be numbered! However, the most distinguished ones were NONSTOP, TAUBER, VH KAPELHOF and PARCO. DARCO’s offspring have huge muscle mass and generally look rougher. But, their excellent jumping qualities make us turn the blind eye as regards their looks. Here is a link showcasing around 40 of his offspring: http://www.darco-stallion.com/Engels/progeny.htm

There were no exterior remarks on the second stallion - LE TOD DE SEMILY! His more popular offspring are FLAMENCO DE SEMILLY, ITOT DU CHATEAU and DIAMANT DE SEMILLY. The last one sired the exterior miracle – DIARADO. 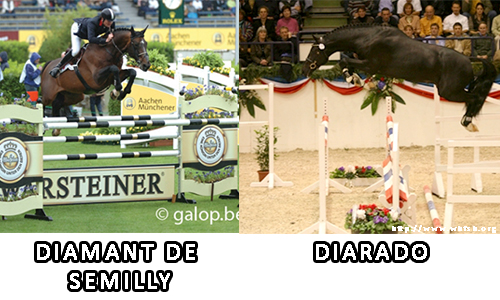 In 2007’s auction in Holstein DIARADO made everyone go into ecstasies as his price rocketed to EUR 1,5 million, ... he was only 3 years of age!!! The horses of that line boast with great exterior and interior, as well as excellent mechanics, nice rebound and huge elasticity!

As regards exterior, ITOT DU CHATEAU, now 17, makes a little exception to the aforesaid, but as his sire LE TOD DE SEMILY, he demonstrates excellent shape, incredible for his height rebound and sports longevity. EDWINA TOPS-ALEXANDER is continuing to rely upon him in the toughest competitions no matter DIARADO’s age!

SILVENA SPORT has planned to purchase a foal of the lines as said above!